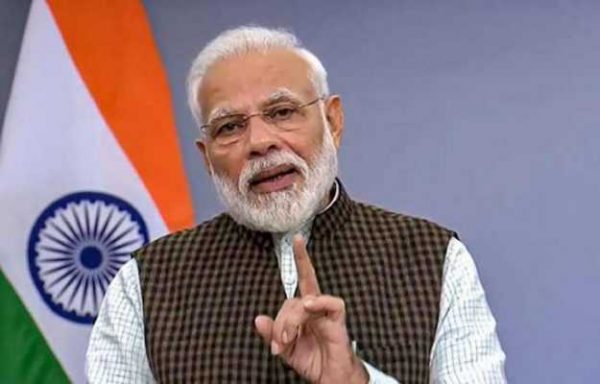 Warm greetings to Gulab Kothariji and the Patrika Group for Samvad Upanishad and Akshar Yatra books. These books are unique gifts to both literature and culture. Today, I have also got the opportunity to dedicate the Patrika Gate reflecting the culture of Rajasthan. This will become a centre of attraction not only for the local residents but the tourists as well.  Congratulations to all of you for this effort.

In any society, the enlightened class of society, authors or writers of the society, are like mentors and teachers of the society. Our school education ends, but our learning process continues throughout our life, every day. There is an important role of books and authors in it. In our country, the continuous progress of writing has been with Indianness and nationality.

During the freedom struggle, almost every big name was somehow associated with writing. We have had famous saints and scientists who were also authors and writers. I am happy that all of you are making constant efforts to keep that tradition alive. And the great thing is that the Rajasthan Patrika Group has the courage to say that we are not in the race of following the foreign countries blindly. You give priority to take forward the Indian culture, Indian civilization and preserving values.

Gulab Kothariji’s books, Samvad Upanishad and Akshar Yatra, are the vivid proof of this. The tradition that Gulab Kothariji has been pursuing today … the onset of the Patrika happened with these traditions. Karpoor Chandra Kulishji had launched the Patrika with the resolve of Indianness and service to India. All of us remember his contribution to journalism, but Kulishji’s efforts to take the knowledge of Vedas to the society was really wonderful. I had several opportunities to meet the late Kulishji personally. He liked me very much. He often used to say that journalism attains significance through positivity.

It is not necessary that one can give something positive to the society only as a journalist or a writer. This positivity, this belief is also very necessary for our personality as an individual. I am satisfied that the Patrika Group and Gulab Kothariji have been constantly pursuing Kulishji’s philosophy and commitment. Gulab Kothariji, you would recall that when I had called a meeting of friends of the print media regarding Corona, then also I had told you on your suggestions and advices that your words remind me of your father. Samvad Upanishad and Akshar Yatra demonstrate how strongly you are taking forward your father’s Vedic heritage.

While I was going through the books of Gulabji, I recalled one of his editorials. Kothariji had written ‘Stutya Sankalp’ on my first address to the nation after the 2019 election results. He had written that after listening to me, he felt as if I had conveyed his words to the 130 crore countrymen. Kothariji, whenever I get understanding on Upanishad and Vedic discourses in your books, I feel at times as if I am reading my own expressions.

In fact, no matter whose words are there for the welfare of the human being or for the service of the common man, they are related to everyone’s heart. That is why our Vedas, views of Vedas have been called eternal. Whosoever visionary sages are behind the Veda mantras, their spirit and philosophy is for human beings. Therefore, our Vedas and our culture are for the entire world. I expect that Upanishad Samvad and Akshar Yatra will also reach the people in the same way as the Indian philosophy has. Today, in this era of texts and tweets, it is more important that our new generation is not weaned away from serious knowledge.

This understanding of our Upanishads, the philosophy of the Vedas, is not just a sphere of spiritual or philosophical attraction. There is a philosophy of creation and science in Vedas and Vedanta which has attracted so many scientists and several scientists have shown keen interest in it. We all must have heard the name of Nikola Tesla. Without Tesla, the modern world would not have been such as we see it. When Swami Vivekananda had gone to America a century ago, he met Nikola Tesla. Tesla was shocked when Swami Vivekananda told him about the understanding of the Upanishads and the interpretation of the Universe in Vedanta.

The way the Universe has been discussed in detail with Sanskrit words like Akash and Pran, Tesla said he would bring it into mathematical equations in the language of modern science. He felt that he could solve several mysteries of science through this knowledge. However, there were many other researches that took place after that but several things came before us in different ways following the discussion between Swami Vivekananda and Nikola Tesla. Still, many researches are taking place.  But somewhere this one context inspires us to rethink about our knowledge. Today, our youth also need to know, think and understand in this sense. Therefore, a book like Samvad Upanishad and deeper churning  on Akshar Yatra will open a new dimension for our youth and will give them ideological depth.

Letters are the first unit of our language and our expression. The meaning of letter in Sanskrit is which cannot be eroded, i.e., it remains forever. This is the power of concept. This is the strength. The concept and knowledge that the sage, seer, scientist or the philosopher gave us thousands of years ago, it is still taking the world forward. Therefore, there is a mention of Akshar Brahma in our Upanishads and scriptures and there is a doctrine of ‘अक्षरम् ब्रह्म परमम्’.  It is said in our scriptures:  -“शब्द ब्रह्मणि निष्णातः परम् ब्रह्माधि गच्छति” i.e., the word is Universe. One who is fully able to understand this word Universe, he is able to attain divinity.

Nowhere does one find such an example of the glory of the word, the word being described as god. Therefore, the courage to speak truth through words, the power to give positivity through words, the idea behind creation of words, is the nature of the Indian psyche. This is our nature. When we realize this strength, we understand our importance and the responsibility towards the society as a writer or as an author.

You see, the media has helped in increasing awareness in all the programmes, whether it is Swachh Bharat Abhiyan to provide toilets for the poor, to prevent many diseases, or the Ujjwala Gas Yojana which protects mothers and sisters from the smoke of woods, or the Jal Jeevan Mission under which drinking water will be made available to each household. The media has also done an unprecedented service by spreading awareness against the Corona during this pandemic. Our media has been doing well to analyse the works of the government, to point out and criticize the shortcomings of the government schemes at the grassroots level. Yes, there are times when the media is also criticized; it has become even more common in the era of social media. But, it is equally important to learn from criticism. That is why, today, our democracy has been so strong and strengthened.

The way we are going ahead with our heritage, science, culture and our potential, and we are pursuing it, we have to carry forward this self-confidence. When we talk about Atmanirbhar Bharat, or Vocal for Local, I am happy that the media is giving our resolve the shape of a big campaign. Friends, we need to expand this vision further.

India’s local products are going global, but India’s voice is also becoming global. Now, the world listens to India more carefully. There is a strong presence of India at almost all the international forums. As such, there is also the need for the Indian media to be global. There should be global reputation of our newspapers and magazines; we should reach the entire world digitally in this digital era; Indian organizations should give awards the way different literary awards are given in the world. This is also the need of the day today. It is also necessary for the country.

I am aware that the Patrika Group has launched an international journalism award in the memory of Karpoor Chandra Kulishji. I congratulate the Group for this. I am confident that these endeavours will give India a new identity on the global media platform. Once again, I congratulate you for the way the Patrika Group has done the work of public awareness during the Corona period. This campaign still needs to be intensified. Our countrymen also remain healthy, and the economy also gets momentum, this is the priority of the country today. I am confident that the country will soon win this battle and the country’s journey will also become Akshar Yatra.

With these best wishes, many many thanks to all of you!