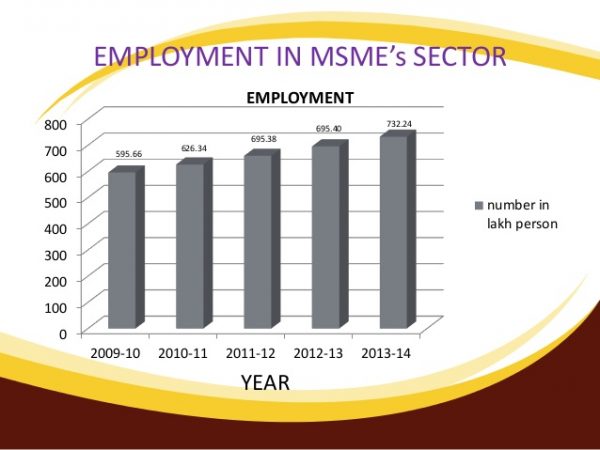 Micro, Small and Medium Enterprises are the largest provider of employment after agriculture. As per the 73rdRound of National Sample Survey (NSS) conducted by  National Sample Survey Office, Ministry of Statistics & Programme Implementation during the period 2015-16, the estimated number of workers in unincorporated non-agriculture MSMEs in the country engaged in different economic activities excluding the MSMEs registered under (a) Sections 2m(ii) of the Factories Act, 1948, (b) Companies Act, 1956 and (c) Construction activities falling under Section F of National Industrial Classification (NIC), 2008, are 11.10 crore.

The Credit Guarantee Fund Trust for Micro and Small Enterprises (CGTMSE) was launched by the Government of India to make available collateral-free credit to the micro and small enterprise sector. Under the PMEGP scheme, the estimated employment generation has increased from 3.58 lakh to 5.87 lakh during the year 2014-15 to 2018-19.

The Ministry has established 18 Tool Rooms  for integrated development of the industries by way of providing quality tools, trained personnel and consultancy in tooling and related areas and upgradation of technology. During the year 2017-18 and 2018-19, these 18 Tool Rooms provided training to 1.47 lakh and 2.08 lakh persons respectively, which has also helped them in self employment.

The Government has taken various steps for generating employment in the country like encouraging private sector of economy, fast tracking various projects involving substantial investment and increasing public expenditure on schemes like Prime Minister’s Employment Generation Programme (PMEGP), Mahatma Gandhi National Rural Employment Guarantee Scheme ( MGNREGA), Pt. Deen Dayal Upadhyaya Grameen Kaushalya Yojana (DDU-GKY) and Deendayal Antyodaya Yojana- National Urban Livelihood Mission (DAY-NULM). The Make in India, Skill India, Digital India schemes are being implemented by the Government and these are likely to enhance the employment base. MUDRA and START UP schemes have been initiated by the Government for facilitating self employment. In order to improve the employability of youth, Ministries/Departments run skill development schemes across various sectors. Government has also implemented the National Career Service (NCS) Project. Pradhan Mantri Rojgar Protshahan Yojana has been initiated in the year 2016-17 for incentivizing industry for promoting employment generation.

This information was given by Nitin Gadkari, Union Minister for Micro, Small and Medium Enterprises in reply to a question in Rajya Sabha today.