Udaipur : Efforts are underway by the forest department to declare a leopard a “man-eater” which had killed two men in past days under Parsad forest range area in Udaipur district. It was last in 1995 in Rajsamand’s Haldighati area, when a leopard was declared ‘man-eater’ and shot down. 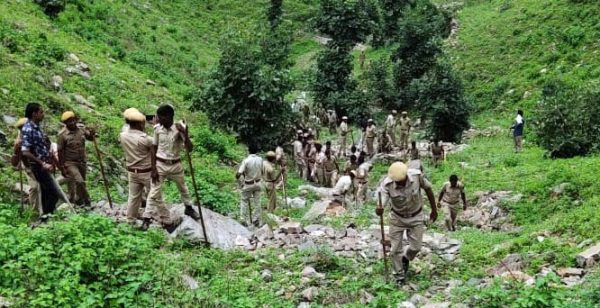 The recent prey of the leopard was a 15-year old boy who was attacked and killed on Monday evening when he was playing in a field in Aifafala of Chanavda village in Parsad block. The villagers had refused to shift the body from the place where it was spotted, however, shockingly, while the forest authorities were holding a mediation talk with the residents on Tuesday late night ,the wild cat struck again and dragged away the dead body in front of the large gathering.

“A team of 110 personnel have been deployed in the entire area covering Bara, Patiya, Paduna and Chanavda. Villagers have been warned not to step out of homes after dark, they are completely co-operating with us. We have traced some pugmarks of the big cat. One of our team is stationed on the top most of a hill so that we are the first one the leopard has to face once it enters the settlement” DCF Ajay Chittora told Udaipur Kiran. The officer said they are awaiting the order to shoot the leopard, once it is termed “man-eater”. Once the order comes, the department may hire sharp shooters adept at hunting down wild animals declared ‘man eater’. The recommendation report was sent to higher officials on tuesday, after a mass protest by the locals in Chanavda area. The leopard had on July 24, dragged away a 40-year old sleeping man from his home in Barapal village and eaten away one of his legs. People had feared repeated attacks and raised suspection that the animal had turned a man eater. Their suspicion grew strong when on Monday evening, the leopard again attacked a 15 year old boy while he was playing in the fields, there were cattle near  him but the wild cat had not attacked the animals but struck the boy.