Energy Efficiency Services Limited (EESL), a joint venture of PSUs under the Ministry of Power and Department of New & Renewable Energy (DNRE), Goa, have signed a memorandum of understanding today to discuss rolling out of India’s first Convergence Project in the State. The MoU was signed in the august presence of R K Singh, Union Minister of State (IC) for Power and New & Renewable Energy, Nilesh Cabral, Power Minister, Goa, Sanjiv Nandan Sahai , Secretary, Ministry of Power and other senior officers of the ministry. Speaking on the occasion, R K Singh, Minister (IC) for Power and New & Renewable Energy said, that the MOU signed between EESL and Government of Goa today in some sense marks beginning of fresh green revolution. When we started the PM- KUSUM, this is what was in our mind to restart fresh green revolution in agriculture sector. He said, “This model is expected to be adopted by other states as this will reduces losses in terms of expenditure on water for farm sector runs into tens of thousands crore rupees in several States. That preempts state spending on health, education, and other important sectors.” Singh also said he has asked his Ministry of New and Renewable Energy to look out for incentivising saving on enegry and ground water by farmers. Singh expected faster roll out of this model as also utilising opportunities under PM-KUSUM by the States. Togetherwith new Roof Top Solar Scheme this will prove to be win win for farmers and States and help them turn into green States. He asked Goa to take lead in this regard with all possible support by the Centre. 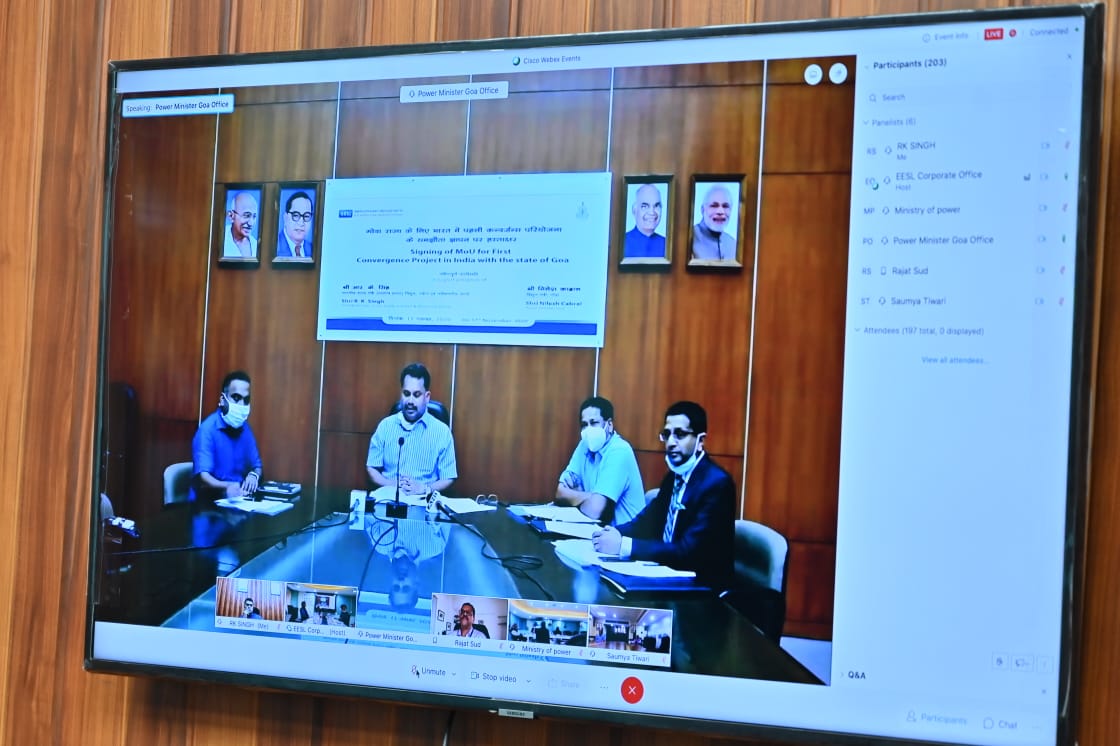 Speaking on the occasion, Nilesh Cabral, Power Minister, Goa, said “Goa is the first state to adopt Convergence. The project will accrue savings of INR 2,574 crores to the State over the period of 25 years, while improving the health of DISCOMs and providing cleaner power. This project will provide clean day time electricity to farmers as well as energy efficient pump sets which would reduce the power consumption as well as T&D losses associated with transmitting power to agriculture and rural feeder networks.”

The projects will accelerate the usage of renewable energy sources, especially for agricultural and rural power consumption in the State. The projects will also contribute in reduction of peak energy demand through deployment of energy efficient pumping and lighting thus contributing to overall sustainability. In Goa, with the objective of providing clean power at affordable rates, EESL will install solar projects in a first of its kind large scale programme where vacant/unused land provided by the Gram Panchayats/electricity board will be utilized. The solar power plant will be installed near the substation, with capacities ranging from 500KW to 2 MW, depending on the size of the land, this will enable DISCOMs to supply power during the day time and reduce transmission losses.

Speaking on the occasion, Sanjiv Nandan Sahai, Secretary, Ministry of Power, said “We believe that in a solar power rich country like India, effective harnessing of this abundant resource can yield handsome returns for all stakeholders. EESL has been one of the pioneers in the implementation of decentralised solar in India and with this project the country will unlock multiple benefits of solar energy, battery storage and carbon financing.”

Through its convergence initiative, EESL seeks to connect seemingly independent sectors like Solar Energy, Energy Storage and LED lights to provide solutions, which can enable in decarbonisation and affordable energy access. Under this programme, EESL is offering convergent interventions, which solve multiple gap areas in the energy ecosystem. It is currently providing solutions such as solarised agriculture feeders, LED street lights in local villages and battery energy storage system. EESL is also leveraging the carbon financing mechanism to rapidly strengthen rural infrastructure in a clean and sustainable manner, to create a resilient and sustainable rural community in India. Its climate financing interventions currently include Gram UJALA, Decentralised Solar and Gram Panchayat Street Lights programmes

A joint venture of NTPC Limited, Power Finance Corporation, Rural Electrification Corporation and POWERGRID, Energy Efficiency Services Limited (EESL) was set up under Ministry of Power to facilitate implementation of energy efficiency projects. EESL is a Super Energy Service Company (ESCO) that seeks to unlock energy efficiency market in India, estimated to at Rs. 74,000 crore that can potentially result in energy savings of up to 20 per cent of current consumption, by way of innovative business and implementation models. It also acts as the resource centre for capacity building of State DISCOMs, ERCs, SDAs, upcoming ESCOs, financial institutions, etc.