Dr. Harsh Vardhan, Union Minister of Health and Family Welfare today interacted with State Health Ministers and Principal Secretaries/Additional Chief Secretaries of 6 states/UT in the presence of Ashwini Kumar Choubey, Union Minister of State for Health and Family Welfare. These states/UT are depicting a considerable growth rate in the number of daily cases and higher mortality but in urban areas situation is improving. 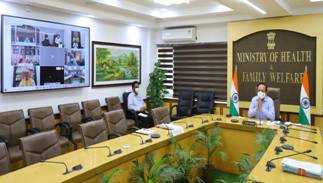 Dr Sujeet K. Singh, Director NCDC presented the epidemiological findings and a granular analysis of the COVID trajectory in the States. He pointed out that the apparent shift of COVID-19 towards lower age groups is driven by the fact that higher age groups have been vaccinated in considerable proportion by now. He suggested the ramping up of testing and vaccination in peri-urban areas as the spread is now going to peri-urban and rural places. He cautioned against the spread of the infection to the rural areas, as the health infrastructure in the rural regions of the country is not adequately equipped to deal with the rising number of cases. He also urged the states to send samples for genome sequencing to identify the role of variants in severity and transmission.

The Union Health Minister highlighted the trajectory of COVID in these states/UT. He applauded the dedication and perseverance shown by state administrations in their fight against the pandemic and simultaneously ensuring the welfare of the people by enhancing benefits of warrior welfare schemes to the people. He said, “Although in the last 24 hours, 3.62 lakh new cases were registered, a net decline of 6,426 cases was recorded in the active caseload. At the moment we have over 37,10,525 active cases. Unfortunately we have lost 4,120 lives in the last 24 hours.”

Detailing on the performance of States, the Minister noted that Maharashtra continuously struggling from COVID-19 second wave since January 2021 although the decline of cases in Mumbai and Pune is significant. At the beginning only few districts of Vidarbha region were a matter of concern in January.However, now 30 districts are affected including Kolhapur, Satara and Beed registering high transmission rate. Similarly, Ajmer, Jodhpur and Bhilwara in Rajasthan, Ernakulam, Thrissur, Mallapuram, Thiruvananthapuram in Kerala, Bengaluru (Urban), Mysuru, Bellary, Tumkur in Karnataka, Chennai, Coimbatore, Chengalpattu, Madurai, Thiruvallur in Tamil Nadu were also flagged as districts of concern. While Bengaluru contributes nearly half the active cases in Karnataka, in Madurai 1.48% and in Chennai 1.32% case fatality rate is higher than that of the State and the country.

The Minister noted that the B.1.617 variant of COVID-19 has contributed to the rise of cases in Maharashtra, Karnataka, Delhi and advised all the States to regularly send samples to INSACOG labs for tracking of emerging variants of COVID.Minister suggested steps taken by the experts to curb the spread, he added, “The Strategy remains the same irrespective of the variants.”He also stressed on the continued need to follow COVID Appropriate Behaviour along with renewed and stringent focus on containment measures for addressing the present surge.

Dr Harsh Vardhan advised the States to have a long-term planning to tackle COVID-19. Many States have been fighting the Pandemic for more than a year which has gradually exhausted the Medical Workforce and the Public Health Machinery. He suggested that States take a pro-active role in ensuring the rotation of workforce and their regular counselling regarding their duty.

On the common demand from the State Health Ministers to increase the quota of vaccines for their States, Dr. Harsh Vardhan patiently explained the factors that have shaped the Vaccination Policy. “88% of the fatalities were in the age group of 45+ which prompted us to open the vaccination to that group in a gradual manner. However, States depending on their own situation can opt for vaccination of other age groups through direct procurement now. The lack of availability of a second dose has been taken into consideration when guidelines for reserving 70% of vaccines were framed.” He also informed of the Monthly production capacity of the vaccines and reassured the states that vaccines will be distributed equitably among the States. Production capacity is being steadily ramped up and will touch 8 Cr doses by May 2021 and 9 Crby June 2021. He stated that this demand for more vaccines from State leadership arouses narrow political passion among the masses which harms the “Whole-of-government” approach to tackle the Pandemic. The State Health Ministers requested for the formation of a common policy of procurement of vaccines from foreign manufacturers.

The Union Health Minister detailed that under the Liberalised Pricing & Accelerated National COVID-19 Vaccination Strategy, along with free vaccination under GOI channel, states can use the non-GOI channel to have a holistic vaccination coverage of their population. Every month 50% of the vaccine doses of every manufacturer would be available for direct procurement by the State Govts& Private Hospitals while Government of India would continue to procure its share of 50% of the vaccines and would continue to make it available to the State Govts totally free of cost as was being done earlier. He also pointed out that various measures are being taken by the Union Government to enhance vaccine availability in the country. Vaccines for COVID-19 have been developed and are being manufactured in foreign countries.Emergency approval for restricted use by USFDA, EMA, UK MHRA, PMDA Japan or listed in WHO (Emergency Use Listing) may be granted emergency use approval in India.