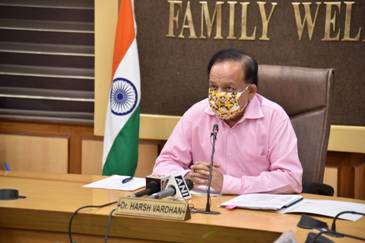 Reiterating his concern that the coming winter and the long festive season pose a significant risk that could threaten the gains made against COVID-19, Dr. Harsh Vardhan said, “We all need to bemore vigilant for the next three months.Hon’ble Prime Minister’s message of wearing mask, maintaining a physical distance and frequent handwashing should reach the last citizen.”

Comparing the COVID trajectory of Chhattisgarh with that of the country, Dr. Harsh Vardhan said, “The recovery rate of Chhattisgarh stands at 87% against the National rate of 92%. The State actually has a lower CFR of 1.19% compared to 1.49% for the entire country.” He expressed concern that the State is still seeing a high positivity in the districts of Rajnandgaon, Durg, Raipur, Bilaspur, Raigarh and Baloda-bazar while cases are increasing in tribal areas as well. The percentage of deaths within 24 and 72 hours of hospitalization, 34.8% and 46.2% respectively, he added, indicates that cases are not identified before they progress to an advanced state.This is an area of concern and needs to be attended by the State authorities, he stated.

The Union Health Minister also observed that the RT-PCR to RAT Ratio of the State is presently 20:80 percent. While the RAT has its benefits in early identification, he added that the gold standard of testing is RT-PCR and the State needs to increase its proportion.

The third area of concern highlighted by Dr Harsh Vardhan was the spike in the number of daily deaths in the recent days, averaging about 50.

Dr. Sujeet Singh, Director, National Centre for Disease Control (NCDC) apprised everybody present on the trajectory of COVID in the various districts of Chhattisgarh.

Sh. Deo noted that State administration hasseen the maximum spread in the Central regions along the Mumbai-Kolkata Transport Corridor. He further added that the recent inflation in death figures was due to clearing the backlog of the earlier days; the recent reports have recorded the ’cause of death’ and this reconciliation has led to the surge. He was of the view that after these arrears were taken care of, the daily death figures would stabilize. He also shared many best practices of the administration like its preparation for last mile vaccine delivery and savings in bulk procurement of COVID related medical items. 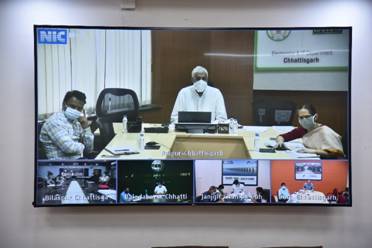 Dr Harsh Vardhan interacted with the DMs of the districts reporting a surge in cases such as Raipur, Durg, Bilaspur, and Baloda-Bazar. The DMs shared their experiences and best practices of strengthening the medical infrastructure, measures to instil COVID Appropriate Behaviour, enhanced testing, and conducting prevalence surveys.

Sh. Rajesh Bhushan, Union Health Secretaryrequested the Chhattisgarh Administration to ramp up testing; to check the feasibility of targeted testing of areas where superspreading may take place like markets and bus terminuses; to complete contact tracing within the first 72 hours; to prepare a database of people who are co-morbid and more than fifty years of agefor their focused monitoring. He added that for encouraging people to adopt COVID appreciate behaviour, behaviour change communication is important. He urged for appeals for following COVID appropriate behaviour to be made by Panchayat representatives, ULB representatives, MLAs, Cabinet ministers and other prominent personalities in the State. 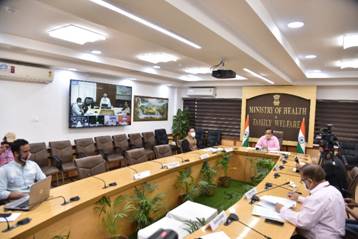 Indira IVF’s first-born Navya, the flagbearer in the quest to eradicate infertility, celebrates her 10th birthday