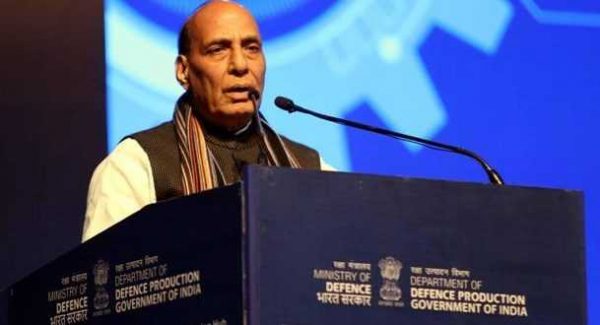 Raksha Mantri Rajnath Singh described DefExpo 2020 as an unprecedented success which not only witnessed participation of a large number of exhibitors but also forged new partnerships and attracted more than 12 lakh visitors.

Speaking at the valedictory ceremony on the fourth day of DefExpo 2020 at Lucknow today, Rajnath Singh said UP stands for Unlimited Potential and DefExpo has succeeded in projecting a new identity of the state in defence sector and the Defence corridor received a huge boost for attracting new investments with the signing of 23 MoUs.

He said DefExpo would also establish India as a Defence manufacturing hub of the world and exporter. He thanked Prime Minister Narendra Modi for inaugurating the DefExpo and adopting policies that improved image of India on world stage.

Lucknow Declaration adopted by the first ever India-Africa Defence Ministers conclave is another landmark achievement of this DefExpo, He added. Raksha Mantri expressed gratitude to Uttar Pradesh Government headed by Chief Minister Yogi Adityanath for the successful organisation of the event.

Chief Minister of Uttar Pradesh Yogi Adityanath said his government had organised many international events during the last few years such as Prayagraj Kumbhmela, UP Investors’ summit and Pravasi Bharatiya Diwas and the successful organisation of DefExpo enhanced the image and prestige of Uttar Pradesh. Describing DefExpo as “Defence Kumbh”, he said the event witnessed presence of more than 3,000 foreign delegates, 10,000 Indian delegates and 12 lakh visitors and laid a strong foundation for development of UP Defence corridor

IN his opening remarks, Defence Secretary Dr Ajay Kumar described DefExpo as a “job well done” as various events concluded smoothly. The event was successful in raising awareness and interest of investors in UP Def corridor he added.

In this Defexpo, 1024 exhibitors participated, 172 of them being foreign companies. 40 Defence Ministers were part of total 70 foreign delegations that visited Lucknow. It also showed that India is not behind any other country in terms of digital technology prowess, Dr Ajay Kumar added.

As the DefExpo was thrown open for the public, huge crowds thronged the venue today.  Thousands of young and old, men, women and children were seen visiting various pavilions and trying to acquaint themselves with the Defence Equipment on display.

The biggest ever such DefExpo to be organised in India was inaugurated by Prime Minister Narendra Modi on Feb 5th where he had set a target of USD$5 Billion for defence exports to be achieved in the next few years. India with its huge population, democracy cannot remain long dependent on defence imports, he ascertained. The DefExpo is part of Government efforts to make India a net exporter of Defence equipment.

More than 22 seminars held during the past four days highlighted the technological changes, digital transformation of Defence and the positive policies implemented by the Government – such as relaxation in  FDI investment, encouraging innovation in Defence start-ups, opening up of testing facilities to Private sector and sharing of technology innovations of DRDO at no cost among others– to make India a defence manufacturing hub.

DefExpo 2020 has covered a lot of ground in creating an environment where Indian industry forged partnerships through MoUs, ToT agreements for innovation and manufacturing.

Bandhan ceremony on February 7th witnessed launch of 13 products including Light Utility Helicopter by HAL, Sharang 155 mm Arty gun by OFB among others. More than 120 MoUs between DPSUs, private and global defence manufacturing companies were signed (71 MoUs were signed on Feb 6th), making it the most successful such event to be held in India.  Among those MoUs signed, 23 of them were by Uttar Pradesh Government.  These MoUs envisage Rs 50,000 crores investment in the defence corridor setup in the state and generate 3 lakh job opportunities.

Among the Defexpo highlights was India Pavilion which offered a peep into the futuristic technologies such as Artificial Intelligence (AR), Augmented Virtual Reality (AVR), Autonomous Systems, Internet of Military Things (IoMT) and Industry 4.0.

Another attraction for people of Uttar Pradesh was Live demonstrations by Indian armed forces at two locations in Lucknow. Demonstrations by Indian Army and Airforce enthralled the audiences at DefExpo site, the Indian Navy and Indian Coast guard demonstrated live performances at the Gomti River front. The acts included Indian Army daredevils performing on their bikes, fly past by Suryakiran jets, slithering action performed by commandos, horse riding etc captured the attention of spectators.

DefExpo 2020 offered a unique opportunity for the Indian Defence Public Sector Units to showcase their technological innovations and new products to the world. Thus DPSUs displayed their strong support to the Armed forces.

A major announcement during DefExpo 2020 was the issuing of Initial Operational Clearance (IOC) certificate of Light Utility Helicopter (LUH) was issued to Hindustan Aeronautics Limited (HAL). LUH was designed and developed as a replacement for Cheetah & Chetak helicopters which are being operated by Indian Armed forces.

LUH is a new generation helicopter in the 3-Ton class incorporating the state-of-the-art technology features which will meet the emerging needs in this class of helicopters in the coming decades.

BDL launched Amogha-3 the anti-Tank Guided Missile. It is a man portable, fire and forget missile.