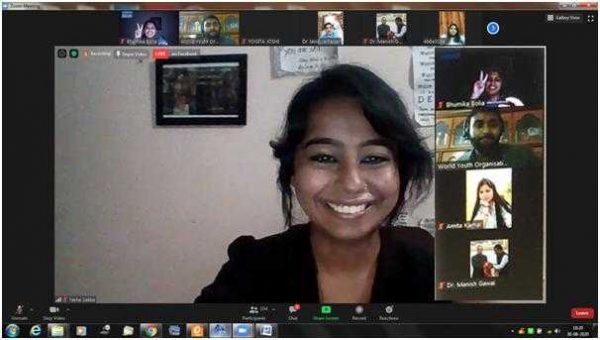 Major issues as Peace Education, Global Citizenship, Empowerment of the post COVID-19 generation, Youth Leaders for Social Transformation, Youth Engagement in Politics, Disabling Inequalities amongst all humans were taken up and Woman Empowerment stayed the highlighted issue. M/s Neha Sakka focused the energy on how global peace can be attained mere by teaching our children to be patriotic towards land as a whole instead of being patriotic towards land under a particular boundary. Along with it she also highlighted how males are victimized under their own domination. This biggest online gathering of women from all possible fields proved the roaring and unfurling flags of women powering over all the sectors of the world to mention a few- Engineering, photography, scholars , business sectors , Govt. administration, start-up sectors, NGOs, lawyers, Doctors, Psychologist, Journalists, grass-root change makers. M/s Bhumika Bolia from Udaipur, Rajasthan also joined the international summit to explore how diversity of land and culture has separated women across the globe yet they all bear the same discrimination through out.

“ It is because of males being unaware that they are a victim too, of their own dominance, that they happen to be non-violent against females – both physically and mentally. They are not allowed to cry or feel sad in open, so in close they beat either the body or the soul out of the frustration that was curbed for so long.”, M/s Sakka quoted. In continuation to that she addressed on another issue pointing- “ New concept of WORLDLISM can be a strong foundation for Global Peace. We are taught to feel patriotic about our country from the age of 3 years and hence we inculcate patriotism only for a land demarcated by boundaries. Had we been taught to feel patriotic for the land all across the globe itself, we would be respecting all the lands and would never dare to hurt any land. This will completely eliminate any war or fights. Its should not be mistaken for anti-nationalism. It is also not about erasing the boundaries of all 195 countries to make one nation. It is about changing our perspective towards the boundaries. We see these 195 countries not as different factories but different department of same factory. Will one department hurt the other? Never.”

The summit united women from all across the Blue Planet onto one screen making each female realize that though separated overseas they all share common pains on innumerous grounds thus making a big family. The pride lies in the fact that the event was initiated by a male. All three foundation members were males who are working hard for appreciating women in all aspects. Why is it a thing to be proud of? This certified that the long fought struggle of “Gender Equality” is paying off. As Mr. Bhaskar Rao was quoted, “ Women are taught to depend on men right from their birth. First on their father or brother then on their husband and then on sons. They are equally powerful and capable, we need to accept their freedom, their leadership and most importantly we need to accept them making mistakes. We all make mistakes. “

CHANGE IS COMING, IT HAS COME.