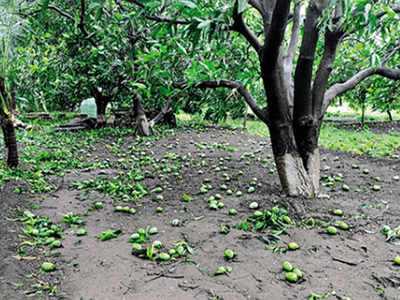 Ahmedabad : Cyclone Tauktae, which claimed the lives of 45 persons in Gujarat, has also caused a huge damage to standing summer crops, with the Kesar variety of mango that is mainly grown in the coastal districts of Gir Somnath and Junagadh, bearing its brunt along with the coconut and banana plantations in parts of the state, farmers said.

Coconut plantations in Junagadh, Gir Somnath, parts of Amreli and Bhavnagar, and banana plantations in Bharuch, Tapi, Vadodara, Anand and parts of Kheda, among other districts, were badly hit, in addition to other standing summer crops, they said.

Hundreds of mango trees were uprooted in plantations across Junagadh, Gir Somnath and Valsad districts, with nearly all the mangoes falling to the ground from the trees in the cyclone that made a landfall Monday night, the growers said.

Kirit Patel, who owns 75 acres of mango farm at Talala in Gir Somnath district, said that mango plantations in Junagadh and Gir Somnath districts, known for Kesar mangoes that are supplied across the country and also exported in large quantities, have suffered a massive damage due to the cyclone.

“Nearly 40 per cent of Kesar mango trees have been uprooted, which is a huge damage, as a tree takes nearly 15 years for crop. Almost all the mangoes on the trees fell to the ground, and these unripe mangoes are of not much use to the growers,” Patel, who is also the Talala APMC chairman and a BJP leader, said.

A mango grower from Visavadar in Junagadh district, also known for Kesar variety said, “There is not a single mango left on the trees. Many trees have been uprooted. We hope the government will provide us with some assistance.”

Valsad district, where both Kesar and Alphonso varieties of mangoes are grown, also suffered a massive damage, the growers said.

The situation of banana plantations has been no different. Gusty winds destroyed the entire plantations of this fruit.

“There were 14,000 banana plants, out of which 9,000 were completely uprooted and destroyed,” said one grower at Upleta in Rajkot district.

Another farmer said there were 21,000 plants, out of which 10,000 were flattened due to the cyclone, which he said, came at a time when the crops were almost ready.

He said last year also they had suffered losses due to the coronavirus-induced lockdown.

Sagar Rabari, a farmer leader and president of Gujarat Khedut Samaj, said, “The state did not witness such a cyclone in a long time, which caused a massive damage to the horticulture as well as summer crops.”

All the crops that were damaged were almost ripe and ready to be stored at home or hit the markets, he said.

Chief Minister Vijay Rupani had on Tuesday assured farmers that the government will undertake an immediate survey of the damages caused by the cyclone to the summer crops and mango, coconut and banana plantations, and assistance will be provided accordingly.

Summer crops, such as bajra, moong, urad, summer groundnuts, sesamum, as well as vegetables and guar gum are mainly grown in Saurashtra and north Gujarat regions of the state, while north Gujarat districts grow bajra and groundnut.