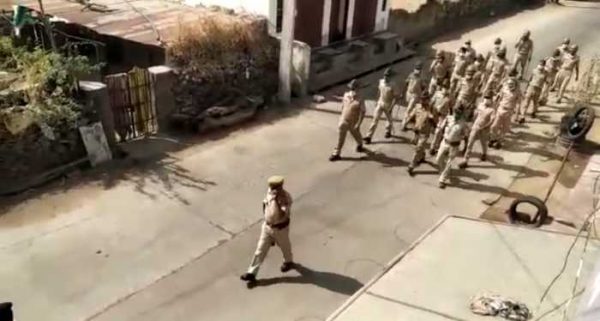 Udaipur : Communal tension has been prevailing in Nathara village of Sarada tehsil of the district after some tribal youths were attacked followed by the murder of one of them by people of different community, on Monday late night. Mukesh (25)  son of Dhanna Meena  was stabbed to death while another youth Raju Meena (23) was critically injured when a group of men from different community attacked them after rue over illegal fishing from Kejad pond outside the village. As the murder news spread, the tribal community beat drums signalling residents to come out and by 6 am more than 700 hundred villagers from 13 adjoining settlements gathered in the area thus increasing the tension.

Youths also spread messages through social media to congregate at the village. Forces comprising 250 personnel from 12 police station were deployed in Sarada, Nathara and Chawand area to prevent mass gathering specially in the time of lockdown . Thr authorities tried to hold peace talks with the men who refused to retreat unless their demands including immediate arrests of all the accused and driving out their families from the locality was not agreed to. The villagers demanded the people from different community to be shifted from Chawand, Mahuwada and Sarada to some other place outside their area. Although police had detained 6 men in connection with the attack and murder, however ,the tension prevailed till the news was going to print.

Udaipur SP Kailash Chandra Bishnoi , Collector Anandhi also reached  the village by evening.  Meanwhile, the divisional commissioner ordered suspension of internet services in the area for 24 hours in order to contain the tension. According to the police, six youths from the tribal community had gone for fishing at Kejad pond on Monday night around 9.30pm.

They were allegedly opposed by few men who were from the side of the contractor who had the fishing contract for the pond. A verbal spat turned ugly as more men were called by the contractor’s people who smashed the youths brutally leading to the murder. One youth who sustained grave injuries is critical at Udaipur hospital , sources said.

Protesting villagers  sat on a dharna demanding immediate arrest of the culprits . They also demanded an ex-gratia of 5 lakh rupees, government job for one of the family member of the deceased , death penalty for the murderers. Villagers refused to move the body for autopsy unless the accused were arrested, they adamantly said.