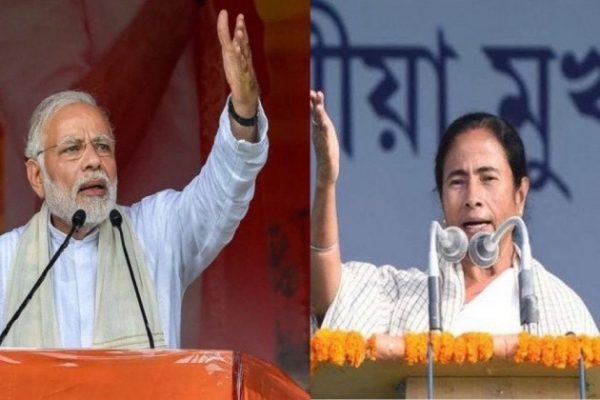 Kolkata, 23 May (Udaipur Kiran): As the counting of votes in all the 42 Lok Sabha seats have reached the final stages before their formal declaration by the Election Commission one by one later today, as many as 20 BJP candidates have surged ahead riding on the crest of huge popularity of Prime Minister Narendra Modi.
Sources at the office of the Chief Electoral Officer (CEO) Ariz Aftab told Hindusthan Samachar here this afternoon that, while BJP candidates were surging ahead in as many as 20 of the 42 Lok Sabha seats in the state, Trinamool Congress nominees are leading in 21 others, with the remaining one seat  is perhaps going to the Congress.
They said though almost all the 42 seats have been witnessing neck and neck contest between BJP and TMC candidates,neither Congress nor CPI-M were seen anywhere putting up a stiff fight following a huge slide in their vote bank during the past few years.
In terms of vote sharing it has been observed that  BJP have been able to substantially increase its vote bank during the past five years in Bengal to take it from only about 7 per cent in 2014 to over 39 per cent now, while the same for TMC has remained static at around 45 per cent,though in 2014 it was around 49 per cent.
But for both Congress and CPI-M the percentage of votes has seen a major slide from around 20 to 25 per cent in 2014 to only about 5.5 and 6.5 per cent respectively now.
Though BJP won only two Lok Sabha seats of Asansol and Darjeeling in Bengal during the 2014 elections, in accordance with the predictions made in most of the Exit polls,  the party is now  ahead in as many as 20 seats so far.
Though the margin of vote difference with TMC has been changing after every round of counting of votes, following the 13th round of counting almost each of the 20 BJP candidates has been able to establish a comfortable lead and is looking forward to win the seat at the end.
Similarly, all the 21 leading TMC candidates, mostly in South Bengal and in urban and minority dominated bordering districts,are also surging ahead with comfortable margins after every round of counting.
Though the Trinamool Congress supremo apprehended some ‘mischief’ with EVMs by BJP and asked her party workers to maintain a round the vigil in front of every Counting Centre in the state, has however,lodged no protest so far and are  slowly disappearing from these temporary camps as the early results started pouring in.
Though the first result of the day went in favour of TMC when party candidate Mala Roy was able to retain the seat for the party defeating Chandra Kumar Bose of BJP by a margin of over 3.48,000 votes, in some other seats like the one in Alipurduar in North Bengal BJP nominee John Barla has established an  unassailable lead of over one lakh so far over his TMC rival after 14th round of counting.
As per the latest reports BJP candidates are ahead in Coochbegar, Alipurduar, Jalpaiguri, Darjeeling, Raigung, Balurghat, Malda North, Malda South,Ranaghat, Burdwan-Durgapur, Asansol,Bongaon Barrackpore,Srirqampore, Hooghly, Jhargram, Bankura,Bishnupur,Purulia and Midnapore.
Similary TMC candidates after winning the Kolkata South seat are also have been able to  mainitain substantial lead in Jadavpur, Diamond Harbour, Mathurapur,Joynagar, Krishnagar, Kolkata North, Dum Dum,Basisrhar and Barasat , Bolpur, Birbhum, Arambagh, Howrah, Uluberia, Tamluk, Contai and Ghatal seats in the face of stiff fight from BJP, while former West Bengal Pradesh Congress President Adhir Ranjan Chowdhury is expected to retain his Beharampore seat in Murshidabad district for the 5th time in a row.
It may be recalled that during the 2014 poll TMC won as many as 34 of the 42 seats with four went to Congress and two each to BJP and CPI-M.
Please share this news
2019-05-24
chundawat