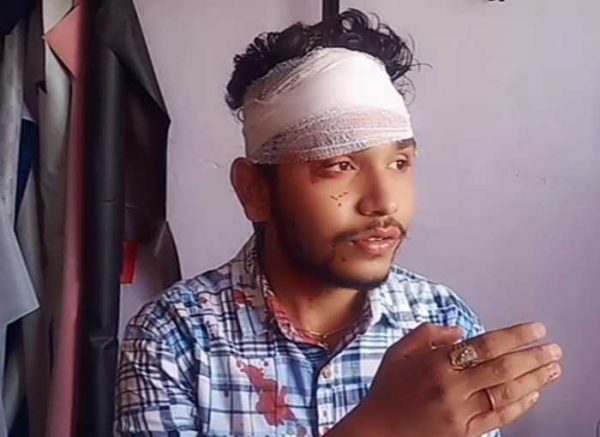 Udaipur : A gang of five bike borne robbers looted Rs 33 lakh in cash at gunpoint from the cash counter of a private bank in Chittorgarh’s Nimbahera town on Saturday noon. One of the robbers assaulted a bank staff when he tried to resist. While leaving with the loot prize, one of the men snatched away a gold chain from a lady customer who had come to the bank.

Armed with guns and sharp-edged weapons, the gang entered the Nimbahera branch of Axis Bank located on the Udaipur road at around 11.55 am and decamped with the cash while brandishing arms.

Chittorgarh SP Deepak Bhargava, additional SP Himmat Singh Deval and other officials rushed to the bank on being informed of the robbery. CCTV footage from the bank and nearby areas has been sought and the staff & customers are being interrogated to get a complete picture of the loot episode. Check points have been laid at several points and teams have been set out to nab the culprits, Bhargava said.

The bank employees told the police that robbers had taken  all staffers, guards  and customers at gunpoint and collected them in one part of the room while others went straight to the cashier and picked the cash kept at the cash counter. One of the men placed a gun at the head of the loan officer Robin Singh. When Singh resisted, the robber hit him hard on the head with the butt of the gun.

Robin singh was hurt who was later referred to Udaipur hospital. The staff also said that the robbers had asked them to  open the bank vault , luckily the branch manager was not there at the time and since the vault key was kept by him, the masked men decamped with the money from the counter. The robbers stacked the bundles of currencies in different denominations in bags and escaped unchallenged in a broad daylight.

According to bank sources, the branch does not generally keep huge amounts of cash, but, during the first week of April, every year, there is a good inflow of money from institutionalized deposits and hence the chance of an insider’s involvement in the loot conspiracy cannot not be ruled out. However, police are clueless on the daylight robbery which has come as a big shock for the cops as well as the residents in the small town.