Alliance in UP has only benefited the BSP 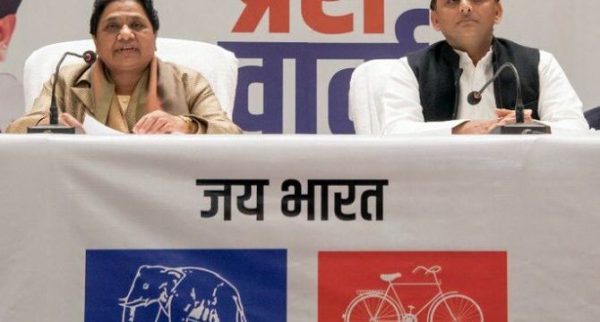 Lucknow,May 24(Udaipur Kiran)There was only one gainer in Uttar Pradesh in the just concluded Lok Sabha elections–the BSP.All other major political players have lost,something or the other.

The BJP has lost nine seats in comparison to previous polls.Three members  SP founder Mulayam Singh Yadav clan have lost elections,sullying the family image.The Congress has lost Amethi ,traditional Gandhi family seat and could win only one .The RLD which had hoped to improve its performance could only bite dust. But the BSP which was reduced to zero in 2014 won ten seats this year.

The grand old party could not save its bastion though it had  fired all cylinders and left nothing to chance.Party president Rahul Gandhi had even pushed sister Priyanka Gandhi Vadra in and made her incharge of the eastern region of which Amethi is a part.She had  campaigned vigorously,drawing good crowds every where.But the crowds did not vote for the party.

The SP patriarch’s assessment was correct.His words have proved to be prophetic.He had said after working out of seat sharing formula between the SP and the BSP that it was against the interest of the SP.By agreeing to play the second fiddle and settling for lesser number of seats,party president Akhilesh Yadav has played into the hands BSP chief Mayawati,he had complained.

He was absolutely right.The BSP which had drawn a blank in 2014 and facing de-recognition of the outfit as a national party has bagged ten seats this year after allying with the SP,ignoring the “murderous attack” on her by SP members 24 years ago.

Besides her,the minority community has also gained from the alliance.A record six members of the community have moved to the Lok Sabha from the state.

The SP has not lost in terms of numbers.It had five members in the present Lok Sabha.As many party members will  attend the new House.What has suffered is family image.Three close family members who had handsomely won the previous elections could not make the grade.

The loser included wife of SP president Akhilesh Yadav.Dimple Yadav has lost to Subrat Pathak of the BJP by a good margin.His brother and uncle have also lost.

There was hope among the RLD workers of the revival of the party after alliance with the SP and the BSP.But it has been dashed to the ground.President of the party Ajit Singh has lost .His son Jayant,too, has been defeated.They had been losers in 2014 as well.

This is the third time that the BJP has proved its supremacy.It had won 71 seats in previous Lok Sabha elections out of the total 80.In the Assembly elections held subsequently it got two-thirds majority.In the general elections held this year it could capture only 62 seats but it was far ahead of other parties.

What has cheered the party most is that it has got back three seats it had lost in by-elections last year.The party was worried most because of loss of Gorakhpur seat,the home turf of chief minister Yogi Adityanath .It was offered this time to a film actor,Ravi Kishan who put it in the party’s bag again.

The other party which has kept its image intact is the Apna Dal,an ally of  the BJP.It had won two seats five years ago and has won the same number of seats this time.

It has achieved this feat despite division in the party and some other problems.The BJP had faith in this only ally in the state and it  did not disappoint.