After 8 months sleep, Bull frogs wake up to put on yellow suits to impress partners! 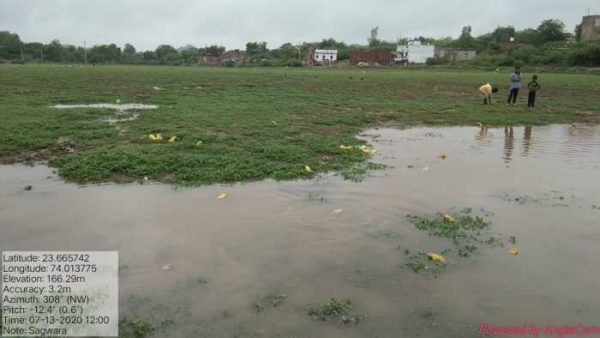 Udaipur : Appearances may be deceptive. The phrase fits much on the Indian Bullfrogs (Hoplobatrachus tigerinus) who are putting on their attractive suits these days to impress the female flock. . Hundreds of bewildered residents collected and watched with curiosity a chunk of bright yellow colored large sized frogs hopping in and around the Sansariya pond, a water body near the forest department nursery in Sagwara town of Dungarpur district on Tuesday.

Frogs usually seen here bear dull olive green or brown color, however, residents watched with amuse their glowing yellow skin for the first time in the season.” The frogs were quite large sized and were turmeric or lime yellow in appearance. Many of the viewers had seen them first time and hence people were amused at the site” said Akhilesh Pandya, a naturalist.

He explained, ” Before rain,soil remains dry and hard and it is impossible for them to come out from a 1′–3′ deep “Samadhi” as they don’t have digging apparatus like claws.Hence they wait for rain.When soil becomes moist,they use their conical snout to hit the soil,thus making a hole, they appear on surface.Like hens,female frogs remain of dull colour to keep away predators. The males call loudly, after mating, they lose their colour and calling instinct abruptly”.

Prof Arti Prasad, Head of the Zoology department at Sukhadia University said ” these frogs are found largely in Madhya Pradesh. They prefer freshwater wetlands and aquatic habitats. There is also a fish specie called Stickle Back which changes four colors during breeding”.