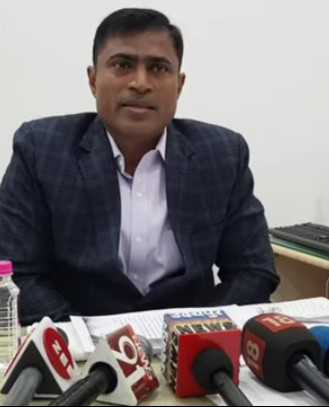 Udaipur : Additional Director General, Anti Corruption Bureau DInesh MN said 2020 had been a successful year for the department with more than 300 officials including an IAS, trapped for corrupt practices.

“CM Ashok Gehlot launched the ACB helpline 1064 in the month of June and since then, we have become more accessible to the common public which is stepping ahead to report about the corrupt officers and staff in different departments” Dinesh said in a brief interaction with the media on Thursday. The ADG on an official tour in Udaipur met people from various walks of life and even took suggestions from various associations on their dealings with government offices.

“Any person, even from a village, who wishes to lodge a complaint against any corrupt official, can simply dial 1064 and speak to our team which will guide him where to take up his complaint in any city. Maybe the ACB team would reach the complainant, verify the complaint and trap the corrupt official like we did in Chidawa recently” Dinesh said. He further said ACB Rajasthan had always been ahead in traps and exposing corrupt people and now with the Zero tolerance policy and proactive measures of the state government, public is trusting the department which is the reason for the increase in trap cases in recent times.

“No one can escape unscathed be it anyone from our department or an IAS, our recent actions have proved it” Dinesh said. He also said that the ACB will now monitor if the complainant who got someone trapped, has been able to get his legal work done from the concerning department.

“The state government is particular to see that the complainants get their genuine works done after traps. The Home Secretary recently took a meeting of the ACB and heads of all departments to impart directions, high level monitoring would be done on all traps to ensure that the complainants do not have to suffer” he said.

Speaking about his attachment with Mewar and in particular Udaipur where he had served as the Superintendent of Police, Dinesh said he could never forget the love and respect showered by the people of Mewar who stood by him and the team during their bad times when they were jailed in connection to the Sohrabuddin encounter case.