5 Reasons Why Buildings Collapse After Construction 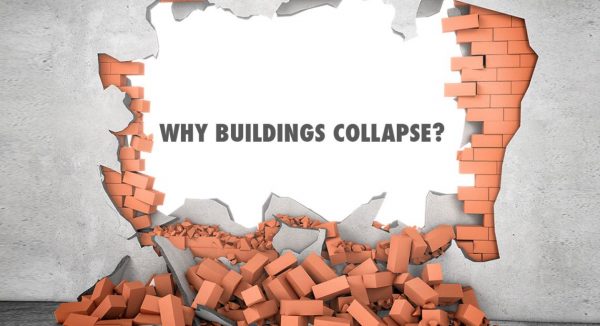 These are the few reasons why a building collapses after the construction.

The sound architectural as well as structural design is very crucial for the most excellent performance and low maintenance of the buildings. Many times, it is observed that the building collapses due to the error in design. The improper design decision will lower the quality of construction and lead to defects during the service life of the building. Violating codal provisions in name of economical or cheap design ignoring its long-term effects is a faulty design and not an economical design. It will invite problems.

Sometimes the drawing with printing mistake or without marking the dimension in drawing or incorrect line, level or due to frequent revisions also lead to the poor quality of construction work which increases the probability of failure of the building or in defects.

The execution errors by the engineer onsite contractor, wrong decisions and supervision lapses of construction head, the stupidity of workers, and the lack of knowledge of standard construction materials and construction processes lead to the low quality of construction work and increase in the home construction cost in bangalore. These deficiencies reduce the load-bearing capacity of the building in terms of strength and reduce life and durability of the building, which may result in the collapse of building fully or partially due to lack of integrity and homogeneity.

The building may collapse fully or partially when unthoughtful alteration or unauthorised construction is carried out at the time repairing or restoration/renovation. During repairing or restoration or renovation, you are subjecting the building to additional load or are trying to change load path of the building or making certain elements under repair, redundant, I.e. they do not participate in resisting load). The change in load path causes excessive stress in structural elements which may be a reason for the collapse of building.

All buildings are designed for the certain life, but sometimes they deteriorate early due to poor quality construction materials, defective construction techniques, and substandardworkmanship at the time of construction, violation of codal provisions, and inappropriate and unintended use of the building. Deteriorations result in the poor strength of the building component and hence it becomes the reasons for the collapse of building partially or totally.

Water leakages, structural or non-structural cracks, spalling of concrete or the honeycombed concrete, loose plaster are the damages of the building which deteriorates the structure. Deterioration of concrete or structural components results in the poor stability of the building due to loss of its proportions i.e. strength. If the buildings are not repaired in time or not maintained regularly, the damages will continue to increase, and it may be the reason for the collapse of building fully or partially. Poor maintenance invites corrosion of metal item or carbonation of concrete or degradation due to sun’s heat or UV rays, all leading to cascading deterioration.

Buildings are designed for pre-designed loads due to construction materials, loads due to occupants, furniture and loads that may come due to natural disasters like earthquake and wind etc. But the placement of heavy building materials, machineries, etc. at the time of construction or additional loads during the service life of the building causes the overloading which may cause the failure of the building. This may also happen when additional stories are built without assessing the strength of existing building. Any horizontal or vertical expansion not considered in original design may lead to overloading.

Change in structural configurations i.e. basic vertical and horizontal load path like the horizontal diaphragm or vertical elements leads to deviation of the load path from the shortest load path. Sometimes such changes in load path increase the stress in the component, and which ultimately may fail. Sometime people remove column, beam or structural wall without considering its consequence and meet a disaster.

Hence, whenever you see any sign of the distress/cracks or sign of instability in structure, immediately contact the competent and experienced structural engineer for the immediate remedial measures to prevent failure of the building. And of course, always do regular maintenance and Brick&bolt manages the all House construction services.