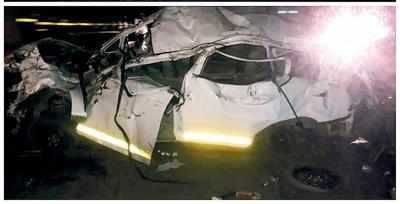 Udaipur : Five persons were killed in two separate road accidents in the early hours of Friday in Udaipur. Two persons were killed and some 19 injured when a private bus overturned near Amberi bridge under Sukher police station area of the city. According to the police the bus had started from Jodhpur on Thursday night for Udaipur and around 5am when it was crossing the bridge, the driver lost control of the over speeding bus which overturned. Two of the passengers were badly crushed after getting entangled beneath the heavy vehicle. One of  the deceased was identified as Takhat Singh (37) son of Gamer Singh resident of MotiKheda village near Dabok.

SHO DurgaPrasad Dadeech said the other deceased was yet to be identified. The injured were taken to the MB hospital while a case of reckless driving has been registered. Passengers told the police that despite repeated requests the driver had been overspeeding which was the reason behind the accident. There were some 36 passengers inside the bus and most of them were sleeping when the mishap took place.

In the second accident, four youths were traveling in a car towards Jaipur from Idar in Gujarat. Around 1.30 am the car collided with a container approaching from  the other side near Patitya under Tidi police station area. The collision was so hard that the front body was completely crushed and three of the youths died on the spot while the fourth one was rushed to Udaipur’s civil hospital. SHO Vijendra Singh said the police is trying to identify all the deceased.